News List of news
By Dr. Keith Amoss for Member of the BCC People and Leadership Group and Career Coach , October 24 2022
Back to news list
" 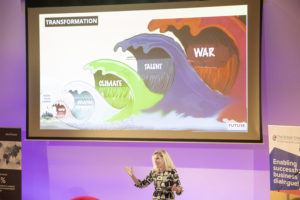 The British Chamber of Commerce (BCC) for Luxembourg proudly welcomed Liselotte Lyngsø, a Futurist, to speak at its Leadership Forum held on 19 October at the Banque de Luxembourg.

It was as fascinating, energising and insightful as anyone might have predicted.

Daniel Eischen and Lene Pedersen , respective Chairs of the BCC and its People & Leadership Group, gave a warm welcome to Liselotte, a special guest visiting from her home country of Denmark to help mark this 30 year anniversary of the Chamber.

In a dynamic and inspiring presentation, the audience was taken on a thoughtful journey to the future, full of Artificial Intelligence, Natural Language Processing, chatbots, quantum computers, robots and the Metaverse. It became clear that these major technological advancements will increasingly affect how we will communicate, work collaboratively and even define our most significant relationships.

As a professional Futurist, Liselotte Lyngsø is someone who predicts a host of possibilities, such as how we are likely to work, rest and play; what we will consume and how we will manage our health in the near and distant future. That makes her a highly valued consultant for several global organizations where she gives much sought after advice on where their resources should be targeted.

Lyselotte opened by highlighting that in this particularly challenging moment with so many external forces at play – whether economic, social or environmental – companies were eager to know what was coming next. 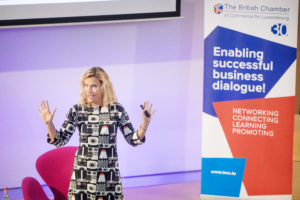 In fact significant change is already here. Albeit at an early stage in some cases. She expressed her confidence that the development of the Metaverse will mean spending a lot more of our time in virtual reality. She foretold that at some point we will be able to hug each other, taste and even smell in the virtual world through our avatars and holograms.

Lyselotte was also clear on the importance of democratizing the technology so that people can make collective decisions on what they want to happen rather than being led into a dystopian world. In her view, we all have a responsibility to consider what kind of society we wanted to create for the future.

With regard to leaders, she felt that they needed to embrace the future with curiosity and with a neutral, apolitical, stance.  The ideal state, she believed was to see these new developments as both interesting and exciting.

The evolution in many areas will be significant and we may be moving from an information society to a new age of precision, she stated. This would mean that technology would be treating us more as individuals and customising services to our individual needs. This would be based on high quality data collected and analysed to see where the most value would be created. As an example, she cited a fictitious cleaning company which in the future would be able to determine from data analyses rather than human observation what needed cleaning, when, where and for how long.

We have many options at our disposal and it was important to notice that with the transformations now taking place there were risks – such as with the use of deep fakes where famous people’s faces and voices were being used to create lifelike video recordings. This could lead to more scams and fake news.

She pointed out that some lessons had already been learned from our collective Covid experiences. These could take us forward in that it seems that some of us will be time owners – deciding where and when we work – while others will be time slaves – tied to particular jobs, hours of work and locations. 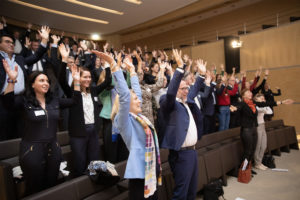 The evening ended with thanks to the sponsors ( Luxdates and Alter Domus) and with a lively networking opportunity where Liselotte generously took the time to mingle and answer questions. This event, together with her recent interview on the Lisa Burke Show on RTL has made sure that the Luxembourg community is now better placed to be thinking more clearly about the future.

Liselotte Lyngsø is a Futurist and founding partner of Future Navigator

Written by Dr Keith Amoss Career Coach and member of the BCC People and Leadership Group.

Please see below links to the Gallery and news articles. 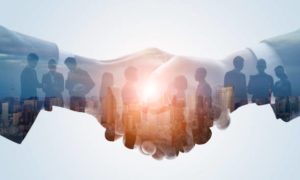 Special Offer for New Members! Any new member joining the British Chamber now will have the remainder of 2022 free and will only be invoiced for 2023 Annual Membership. See here or for further information please call +352 465 466 or email info@bcc.lu. 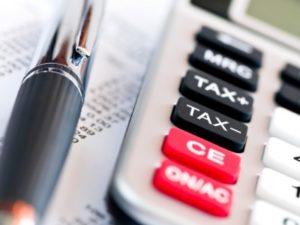 By Jazmin Campbell  for Chronicle.lu, November 16 2022

The American Chamber of Commerce in Luxembourg (AMCHAM) and the British Chamber of Commerce for Luxembourg (BCC) held their traditional joint "Personal Tax Lunch" in the Salon Panoramique at DoubleTree by Hilton hotel in Luxembourg-Dommeldange on Monday 14 November 2022. Laura Foulds, Managing Director at Analie Tax & Consulting, for her annual in-person personal tax update (after a couple of COVID-19-related virtual editions). Laura provided attendees with an update on changes in Luxembourg regarding personal tax this year as well as expected changes for 2023 and provided feedback on commonly asked questions around filing taxes in Luxembourg.